We love to go out for sushi.  We actually enjoy a nice sushi meal at least four times a month.  Lately we have been talking about trying to prepare sushi at home.  I am not talking about sushi rolls.  I am talking about nigiri. A raw piece of fish on top of an oblong brick of sticky white rice.

Yesterday I decided I would go to Uwajimaya, Seattle’s asian supermarket and pick up some sushi grade salmon.  What I learned, you don’t just purchase fresh salmon for raw consumption.  The salmon must be frozen first for a period of time to sufficiently kill any potential parasites. They had a plentiful supply of sushi grade fish available.  I bought Atlantic salmon and “tako”, which is octopus.  The octopus had been already steamed and sliced.

While I was at Uwajimaya, I decided to gather the ingredients to make a Pho style soup.   I looked up a recipe for vegetarian pho broth.  My favorite “go to” food blog, thekitchn had a very simple recipe I knew I could prepare.  I collected the few ingredients I needed and I was off and running.  I also picked up dessert.  I found some delicious tiny bite size cream puffs, filled with fresh dairy cream and vanilla!

Well, I am sure we will still go out for sushi, on occasion.  However, I have to say, as a family, we had a blast preparing this meal together.

Wash the rice under running water for 1-2 minutes until the water runs clear, washing the starch out.  Place rice in a 2 quart pan.  Add 4 cups water and bring to a boil over high heat.  Boil 1 minute on medium heat.  Stir once, cover pan and turn heat down to low.  I have read you should only use a wooden spoon to stir your rice.  A metal spoon will damage the rice. Simmer for 20 minutes.

While rice is cooking, in a small pot combine vinegar, sugar and salt. Heat, over medium until all solids become liquid.

When the rice is done, transfer to a bowl.  Stir in your seasoned rice vinegar and allow to come to room temperature.

Using wet hands, we formed little oblong bricks of rice, placed a little spot of wasabi, then topped with a slice of fish. Serve with little dishes of soy sauce for dipping. 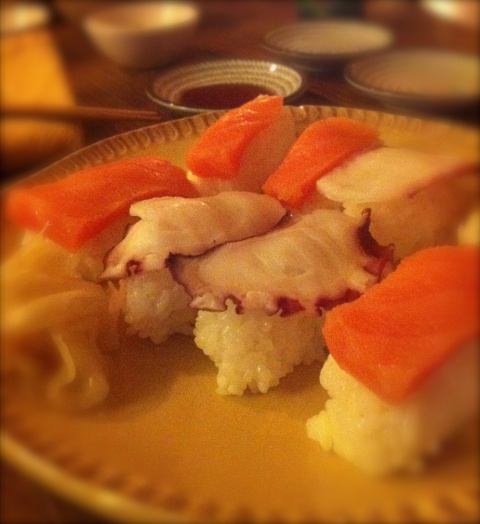 Since we were going to prepare sushi too, I prepared the broth a few hours before. I kept it on the stovetop, covered, and for the reason that it is vegetarian, without heat.

Char the onion and ginger under a broiler until slightly blackened, about 5-7 minutes on each side.  Rinse well with water.

Bring broth to a boil, reduce heat, simmer, covered, for 30 minutes.  Strain and keep aside until ready to serve.

While the broth is simmering, prepare and bring your toppings to the table.

Since I accidentally bought the soba wheat noodles, I boiled the noodle in the broth for a few minutes before serving.  Otherwise, if you have rice noodles, place noodles in a large bowl and cover with hot water.  Let stand for 20-30 minutes or until tender but still chewy.  Drain.

Divide noodles between bowls, ladle about 2 cups of broth in each bowl.  Serve, allowing diners to garnish their own bowls. 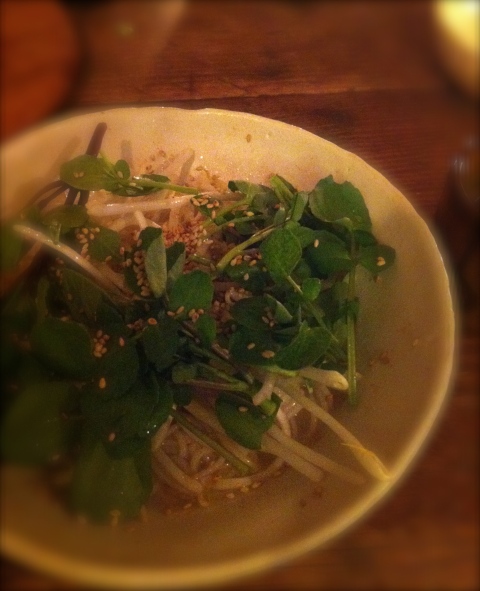 Oh, did I mention Sake?

§ 5 Responses to sushi, at home

You are currently reading sushi, at home at COTTAGE GROVE HOUSE.