Despite the fact that it is summer and the heat has a way of killing our enthusiasm to turn on the stove, I did it anyway;  I made corn soup.  And what a delight!  Sweet corn and tomatoes are the quintessential tastes of summer. Adding a nice plump jalapeño to the soup pot created a softly spiced bowl of summer goodness. 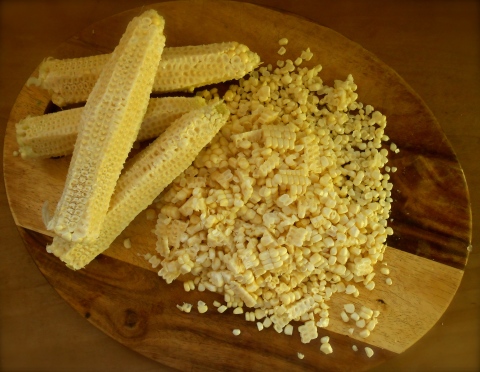 After shucking your corn and before cutting kernels for a soup you want to eliminate as much silk as possible. A helpful little technique in removing the silk from your corn is to dampen a paper towel and wipe the ear from tip to stem to capture any clinging strands.  A few silk strands left on an ear of corn that’s destined for the grill is no big deal, as they will be quickly singed off.  On the other hand, it is not very pleasant to come across a silk string in your soup. 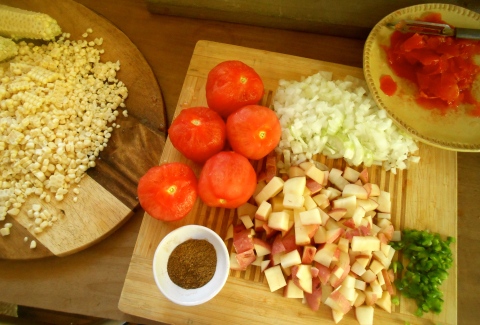 Hold each ear of corn with the flat end in a large bowl and use a sharp knife to cut down the cob, removing the kernels.  You should have about 2 cups of kernels.  Reserve the cobs.  In a heavy based stockpot, heat the olive oil, then add the onions and 1/2 teaspoon salt.  Cook over low heat until the onions are soft, about 10 minutes.  Add the cumin, coriander, chili powder, jalapeños, and garlic to the pot and sauté until the jalapeños are slightly softened, 2 to 3 minutes.  Add the tomatoes and cook until they release their juices and soften, about 10 minutes.  Add the potatoes and reserved corncobs, and 3 cups of water.  Cover and simmer until the potatoes are tender but still firm, 8 to 10 minutes.  Add the corn kernels and cook for 1 minutes more, until the kernels are heated through.  Remove the pot from the stove.  Remove the corncobs.  Using an immersion blender, blend the soup until about half of it is puréed, or put half of the soup in a blender and purée it, and then combine.  Add the half and half and cheese and return the soup to the stove.  Heat over low heat until the cheese is melted; do not boil.  Taste and season with more salt as needed.  Ladle into soup bowls and serve right away.

Save the corncobs!  Simmering the corncobs in the soup intensifies the sweet corn flavor.